Josh and I have decided that we will keep trying for more children. We don’t want to stop at two (on earth.) As most of you know, my first two pregnancies were perfect, normal pregnancies (besides the constant nausea for four months, but that’s still “normal.”) Each pregnancy went to 41 weeks and ended with a beautiful birth and a healthy, screaming baby boy. Now that I have developed anti-kell antibodies, I will never have a normal pregnancy again. We know that any baby we conceive will have a little over a 50% chance at life. We also know that we won’t find out if the baby will live until 17 or 18 weeks gestation. If the baby died from the anti kell antibodies it wouldn’t be an early miscarriage. It would be a second or third trimester loss. Also, we just had an early miscarriage and lost our baby Jude right after Lucy’s due date in July. Obviously, the safest thing for us to do now would be to get my tubes tied and to make sure I never get pregnant again; to make sure we don’t have to live through the hell of losing another baby. But is being safe the main goal of my life? Should my top priority be protecting myself from pain and heartache? And where did I ever get the idea that I could protect myself from pain if I wanted? Even normal pregnancies in healthy women are full of risks and often end in miscarriage or stillbirth. What would my life be like if I chose the “safe” option every time?

When I was five, my parents moved our family to Bindura, Zimbabwe to be missionaries. Several times my Mom was asked how she could take her children “over there.” What if it was dangerous? What if something happened to one of us? How could she take those risks with her family?  Her answer, “The safest place to be is in God’s will, wherever that is.” I know that the safest place for me to be is wherever God wants me. We feel like He wants us to try again for a baby naturally, to not give up hope for more children, and that’s what we are going to do.

Most people are happy to have two children and be done. I always wanted 5, but after Lucy died I thought I could never have any more. I mourned the loss of my future children as much as I mourned Lucy. I was heartbroken about not having anymore children. I tried to get used to the idea. One day I was lying in bed sobbing. I still couldn’t believe my belly was empty and my baby was dead. I thought of myself as a little girl. I always wanted babies. When I was little I would take care of my baby dolls and close my eyes and try to fast forward time to when I could have my real babies. Being a mother was the thing I looked forward to the most in my life. Anyway, that day I was crying and imagining that little girl, I felt so sorry for her because she had no idea what was coming. She had no idea that the worst thing she could imagine would happen to her. Her baby would die and she might not be able to have more. I told God that I wouldn’t try to have more kids if He told me to stop. I felt like He said, “Don’t you think I know you? I made you who you are. I put that desire for children in you and it is a good thing.” A couple days later I read this verse-

from where He sits enthroned He looks out
on all the inhabitants of the earth,
He who fashions the hearts of them all
and observes all their deeds.

He fashioned my heart like this and He has a purpose for it. He also knew what it would do to me to not only lose my one daughter, but to lose the possibility of having more children. It’s very ironic that this very rare problem would happen to me, of all people, who so desperately has waited and hoped for a houseful of children my whole life. It’s almost hilarious in a way. God also knew how much I wanted my rainbow baby, Jude. I have never had dreams of being rich or having a successful career or buying a big house; my one big dream was to have a big family. Maybe through this loss God was showing me how I idolized my children and my dream of a big family. Maybe He was teaching me to let go of control and realize that He is in charge of my life, and I am learning to do these things. But maybe He also wanted me to fight harder for my children. Maybe He put that deep desire in me as a little girl so I wouldn’t give up trying for my babies.

You know how you feel about your own children? How you would do anything for them? That’s how I feel about my future babies. I will do whatever it takes to get them here. It is terrifying to think about the risks, about the possibility of going through this again. But I know that if I don’t try I will get to the end of my life and look back with deep regret. I know I will wish I had taken the chance to have more children. My future children are no less real and important than the children I have with me now or my children waiting for me in heaven. They all have an equal portion of my love and own an equal part of my heart. My Mom once asked one of her friends who had 6 kids if she regretted anything about having 6 children. She said, “Yes. I regret that I never had 7.” I can understand that. I was talking to someone the other day about trying again for a baby. She asked me if I thought I could handle another late loss like Lucy. I thought about it and realized it would be easier to go through another loss trying than to not try and stop at two.

Right after we lost our rainbow baby, Jude, Josh and I were heartbroken, but we both agreed that it was worth the risk. It’s worth the risk to try again. I have always had a hard time understanding the families that don’t use any birth control and have baby after baby after baby. They don’t really get to choose how many babies they get or when they are ready for the next baby. I just didn’t get it before losing Lucy. Now I do. I have noticed that most of these families suffered a pregnancy loss early on, usually with their first child. Even the Duggars (19 kids) had a miscarriage with their first baby. I get it now. I’m not saying that I will never use birth control or that I want 19 kids, but when you lose a baby it changes your perspective on life and I think it makes life so much more precious. I can’t believe that Liam and Asher made it all the way to life on earth; it’s amazing. Right now it seems like every baby that survives pregnancy is an absolute miracle. I feel like I want to be open to whatever life God decides to give me, whenever He wants to give it to me. Despite all of this, the main reason why I am not stopping at two children is because God hasn’t told me to.

By the way, I just want to say how thankful I am for my two boys. I love them so much and I appreciate them more now than I ever have. I appreciate the cars, monster trucks and trains that fill every crevice of the house. I appreciate their dirty little faces and weird eating habits and the way they smell like sunshine and dirt. Yesterday I was running errands and when I saw their carseats in my rearview mirror my eyes filled with tears because I am so happy to have two children. They are the lights of my life. They are my answers to a lifetime of prayers and I recognize how blessed I am to have two here on earth and two in heaven. Many women never get one. I still can’t believe that I get to be their mother. 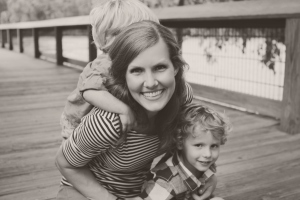 8 thoughts on “WHY WE’RE NOT STOPPING AT TWO”