Since losing my babies I have encountered the same scenario that many other baby loss moms also encounter on a regular basis. That awkward moment when someone says something like, “How many kids do you have?” or “Is this your first baby?” or “When are you going to start trying for that girl?” I had someone give me a very sweet compliment that actually broke my heart, “You look GREAT after having two kids!” I wanted to correct her and say, “I’ve had three kids,” but I just smiled and said thanks. I still regret not speaking up. I also had a really awkward experience when I was running late to one of my sons’ doctor’s appointments. We rushed into the waiting room and my boys were loud and full of energy and I’m pretty sure one of them was missing a shoe. When I finally sat down after signing in, an older lady leaned over, and with a knowing look she said, “Aren’t you glad you stopped when you did?” I was so taken aback I just didn’t have a ready response for that one. I said, “Oh, I’m not done yet.” Looking back, I should have said, “I didn’t stop at two. They have three younger siblings in heaven.”

It is hard to know what to say. Most of the time I am torn between telling the truth and possibly ending up in tears in public, AGAIN, or keeping quiet and feeling like I’m disowning my children or fueling our society’s ridiculous pressure to keep miscarriage and stillbirth on the down low. Looking back, I can only think of one or two times that I spoke up about my loss and regretted it. One guy at our yard sale fundraiser actually laughed when I mentioned that I had a daughter in heaven. And the other time was when another pregnant woman (due around Lucy’s due date) told me to be happy that I didn’t have to be pregnant in the summer. I still have trouble letting that one go. But all of the other countless times that I have spoken up about my Lucy, Jude or Pax, I have been incredibly encouraged and I have often been a comfort to others. EVERY single time another woman has shared her story of baby loss with me I have been overwhelmingly grateful, humbled, and comforted. Why should this feel like such a lonely club when SO many other women are in the club with me? It shouldn’t.

I want to challenge you to speak up about your loss, your child or children. Of course some people prefer to grieve quietly and privately, which I think is wonderful too. But if you feel like you might want someone to know about your lost child, I say tell them. And if you have a niece, nephew, brother, sister, or grandchild that is in heaven, I want to challenge you to speak up as well. I long to hear my siblings acknowledge Lucy, to hear my parents and in laws speak her name, to see that others remember my daughter. I want her to be just as important to them as Liam and Asher are. This past spring Liam played soccer for the first time and to tell you the truth, I was terrified. I dreaded it for weeks ahead of time, because I knew there was a good chance that it would be crawling with triggers. I know a few families who have kids playing soccer as well and they have babies Lucy’s age. I was afraid of having to constantly be around pregnant bellies or baby girls. I remember walking out on the field with Liam and Asher in tow, feeling completely alone, sad and anxious. It felt like all the other families were whole, not missing anyone, like every woman got to keep her babies (which I know is not true, but it felt that way.) I often feel like an outsider. Well, one day near the beginning of the season it was extremely cold and I felt bad about taking little Asher outside for two hours in the freezing wind. My dad offered to take Liam to practice so I could stay home with Asher. Later after practice, my dad told me that he had started talking to one of the other parents on the sidelines. The man asked my dad about Liam and my dad said, “He’s my grandson. I have eight grandchildren on earth and three in heaven.” That led this other man to open up to my dad and he told him that he and his wife had lost twins at 22 weeks a few years ago. When my dad told me this I was shocked. I felt so overwhelmingly happy that he included my three babies with the eight on earth. I loved hearing that he acknowledged all of his grandchildren, that he is proud of ALL of them. I also felt like I WASN’T alone out there on the soccer field. Someone else knew how I felt, and that was such a comfort to me. I never was able to find out who my dad had been talking to, I think it was actually a parent from a different team, but I never felt alone again at any of the practices or games. I am so thankful my dad spoke up, even though the easier thing would have been to keep silent.

I think it is also important to speak up about our babies at home, around the other children (if there are siblings, or siblings to come.) I have a framed picture of Lucy’s footprints in each of the boy’s bedrooms so they see it every day and remember their little sister. A few weeks ago I was talking over the fence in the backyard to one of our neighbors, an eight year old boy. He had seen Lucy’s tree marker in our yard. It’s there temporarily until we can get it to her oak tree. Anyway, he asked who Lucy was and I told him it was our baby girl who had died last year. I was shocked when he asked, “Oh, well did she die before or after she came out of your belly?” I told him she died before she came out of my belly and he astounded me again by saying, without hesitation or embarrassment, “Oh, my mom had four babies who died in her belly before they came out.” Wow. FOUR! I never would have known if he had not said something. He seemed so comfortable talking about it too, which I loved. Apparently, his mom talks about her lost babies at home. Another person who spoke up and blessed me with his story was a random pizza delivery guy. Liam opened the door when he knocked. The delivery man was probably in his forties and was sweet to the boys, asking them what their names were. Liam said, “I’m Liam and this is my little brother Asher and I have a sister named Camille.” Liam and his cousin, Camille are very close and sometimes tell people they are siblings. Before I could correct him, the man said, “Oh that is sweet. I have a sister but I don’t know what her name is because she is in heaven. One day I will ask her what her name is when I get to heaven.” My mouth dropped right open. He told me his mother had had a stillborn baby girl before he was born and she had never told him what his sister’s name was. I told him that we had lost a baby girl too. I was so touched that this man would share his sister’s story with my kids and show them that they are not the only ones who have lost a sister.

A few months ago I heard this proverb- 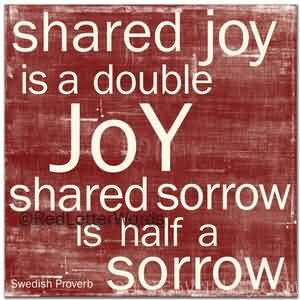 I think there is some real truth to that statement. If you have lost a baby, don’t feel like you have to stay silent. Your story might bless and encourage someone more than you know and your own sorrow might be lessened in the sharing. Don’t be afraid to speak up.

8 thoughts on “Speak Up”