I am now 19 weeks pregnant, exactly how far along I was when I lost my Lucy Dair. It is a sad benchmark to reach, but wonderful at the same time because Nora is ALIVE! I know exactly what Nora would look like outside of the womb this week. Perfectly formed in every way, just tiny…9 inches long and 1 pound tiny. I miss Lucy so much, every day, every time I see a toddler girl, every moment. It’s devastating to think that Nora will never know her big sister on earth or share all those fun sister moments in life that I am so grateful for. Loss will forever be a part of our family. I always wanted a picture of the boys kissing my belly with Lucy inside, but when I was pregnant with her I was paralyzed by fear. I barely took any photos because I thought they would make me sad if I lost her. If only I had known those pictures would have been my most treasured possessions. This week, I made sure to get a picture of Asher kissing his baby sister (if Liam was here he would be in the picture too.) 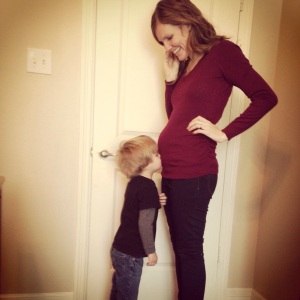 I am so thankful Asher got to kiss Mommy’s belly this week instead of his lifeless baby sister outside of the womb, a fear of mine that has grown stronger and stronger as the 19 week mark approached. Thank you, Lord, for this gift.

Yesterday I had another check up with Dr. Moise. I was totally expecting Nora to be anemic and need a blood transfusion since her MCA scan was 1.48 last Wednesday. God did another miracle and somehow her anemia has slightly gone down to a 1.40. She looked great, no signs of distress, no extra fluid and a healthy heart. Dr. Moise said he would see me in a week. A whole week without an appointment! That means I will be at least 20 weeks before Nora will need a transfusion. My goal was to make it to 20 weeks before needing a transfusion and I can’t believe it’s going to happen! For some reason babies seem to handle the blood transfusions better once they’re past the 20 week mark. Another amazing development- last week Dr. Moise told me that my placenta was partially on the front of the womb, blocking his way to the umbilical cord. This would not be ideal for a blood transfusion since they stick a long needle in through my belly and try to hit the baby’s umbilical cord to get blood into her umbilical vein. He said he was going to have to go through my placenta to do a blood transfusion, which makes it a bit more risky. I asked if that could cause a fetal maternal hemorrhage (when the baby’s blood leaks out through the placenta) and he said it could. Josh has been praying specifically that something would change before Nora needed a transfusion and that the doctor would not have to go through my placenta. Well, guess what? Dr. Moise was baffled while looking at the ultrasound because my placenta has moved (in only five days!) It’s now completely out of the way and there is a direct route to the umbilical cord without going through the placenta. The doctor couldn’t believe it and said maybe I had a strong contraction that moved the placenta or something…he didn’t have any other explanations. Thank you all for praying so fervently for our family and especially for little Nora. Your faith is moving mountains! Or placentas….just as important 🙂

Another thing we are thankful for- we were able to get a room at the Ronald McDonald House last night and can stay there up to 45 nights. We were on a waiting list since all of their rooms were full and we were the sixth family on the list, so I thought it would be a really long time before we got a room. Well, they called us at 4:30 yesterday and said, “We have a room and it’s only available today. Can you get here before 6:00?” It was rush hour traffic and we were at least an hour away but I said, “Yes! We’ll be there!” So we grabbed as much as we could in about two minutes and rushed over in the pouring rain, hoping we would make it in time. We got there at 5:50! Asher had no idea what was happening because we didn’t have time to prepare him. He was just getting settled in at “Mrs. Joyce’s house” so when we got there he walked in and just burst into tears. He has had a lot of major changes take place in his little life recently, poor guy. The people at the Ronald McDonald House were so kind and welcoming. They gave Asher a pack of matchbox cars (which instantly made him feel better) and there was a really cute dog walking around (apparently he’s the house dog and he lives there) that put Asher at ease. It is such an amazing place with fun play areas for the children, a playground outside, TV rooms, a kitchen and dining room and more. A delicious dinner was provided the first night we were there (most days they provide at least one meal.) Here’s Asher having his first meal at the Ronald McDonald House: 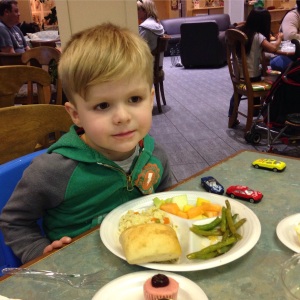 We also received more encouraging cards in the mail this week with sweet notes from people (mostly strangers!) who are praying for us. All of these things have made our stressful time a blessed time and we are thankful for each one of you. Please keep praying for Nora. Pray that God would do more miracles and would keep her anemia level under a 1.5. I will post an update after my appointment on Monday. I hope you all have a great rest of the week.