On Monday I had my 25 week check up. I expected everything to be perfect since Nora had been kicking and moving like crazy ever since her transfusion. The doctor did an MCA scan and it was somewhere around 1.6! That means (supposedly) that Nora is quite anemic even though she just had a blood transfusion a week ago. Dr. Moise did say that MCA scans become unreliable after transfusions start, but we were still expecting to see a lower number. Other than the high MCA scan Nora looked great. She was very active during the ultrasound and there were no other signs of anemia. Dr. Moise was out of the office when I was there so they said they would talk everything over with him and then call me with their decision. The doctor was surprised at such a high number on the scan and was confused because she wasn’t acting anemic. I was told to prepare for the possibility of doing an IUT on Wednesday (yesterday) instead of next week. I felt stressed out and anxious after the appointment.

I remember when Lucy had her IUT and the doctors were so happy because they thought it had been a complete success. We all sighed with relief and praised God for the miracle He had performed. We thought she had been saved. I never felt her move again and she died a week later. I wondered if something similar was happening with Nora, although she was being very active. Why was her MCA scan so high? After a few hours the doctor called and said Dr. Moise had decided to stick with the original plan and transfuse next Tuesday. He wasn’t alarmed by the high numbers from the scan and thought she would be ok for another week. I feel uneasy about it (and I would feel uneasy about transfusing this week too) but I have to make a decision, again, to trust Dr. Moise with my daughter’s life and to trust God at every turn. This whole pregnancy is an exercise in submitting my will to God’s plan and laying my fears at His feet, over and over again. I am really tired of worrying about Nora and wondering if she is ok. There is a constant uneasy feeling right under the surface, probably the same feeling a parent has when their child goes off to war. My baby is living in a very unsafe environment and she is so vulnerable. I have also noticed that her movements seem to be getting more sluggish, especially compared to the week after the transfusion.

I got some 3D ultrasound pictures of Nora at the appointment. Oh, how I loved seeing my girl!! But to be honest some of the pictures kind of looked weird…her face was all lumpy and her nose looked weirdly gigantic (I think most 3D ultrasound pictures look a little distorted.) The main thing that stuck out to me, though, was how small and premature she looked (because she is!) Most doctor’s offices won’t even do a 3D ultrasound until after 28 weeks because the baby looks chubbier and more developed in the third trimester. The pictures reminded me how much longer Nora still needs to stay in the womb to finish “cooking.” She is not ready to come out and would be severely premature if she was born anytime soon. That stressed me out since it happened at the same time as the high MCA scan. She needs to get out of the dangerous environment of my womb, but she also needs to stay in and finish developing. I just want my daughter to be safe. Please pray that Nora gets through this week ok and still looks good at her pre-op appointment on Monday. Also pray that I will know if and when I need to go back in and have her rechecked if her movements continue to decrease.

Despite the stressful appointment on Monday, there are so many things I am thankful for. I am ecstatic to be at 25 weeks! Here’s the 25 week bump: 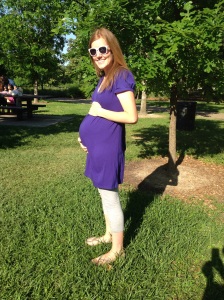 Also, Asher loved being able to see his little sister in 3D and picks up her pictures everyday and kisses them (they’re starting to get sticky) and says, “Oh my baby Nora! Look Mommy, it’s baby Nora!” He can’t wait for her to be here. 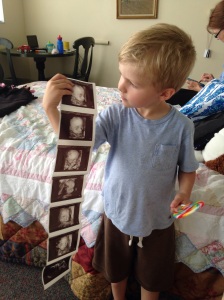 We discovered that Nora got her Grandbarry’s nose: 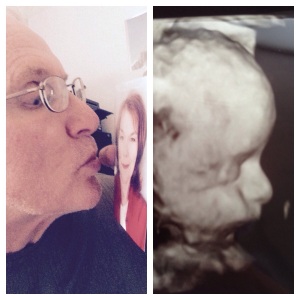 Can you tell that my Dad misses my Mom?

I’ll end with a quick story from this past weekend. A few weeks or maybe months ago I got a message from a woman named Amanda who had read my blog. She also had two kids and had decided to adopt their third baby. I think I’ll share her whole story later on my blog but basically she and her husband went through four failed placements in about a year. FOUR! I cannot imagine. Anyway, she said she lived in Houston and her husband was a pastor at a church here and she invited us to come to her church. This past Sunday we finally tried it out and it was wonderful! Right when we got there Amanda found me and introduced herself and was so kind. After we found our seats I decided to get some coffee and on my way there I passed a familiar looking woman. It took me a minute to figure out how I knew her…she is one of Dr. Moise’s ultrasound technicians, the one who always does the MCA scans on Nora. It was fun to actually run into someone I knew. So I went to get the coffee and there in front of me in line was another really familiar looking woman. I thought, “Where do I know HER from?” and I could NOT figure out how I knew her but I felt like I was looking at an old friend, someone who made my heart feel warm and happy. Then I realized it was Beth Moore! (Definitely google her if you don’t know who Beth Moore is, or even better, do one of her Bible studies!) I wanted to be really annoying and tap her on the shoulder and say “Oh my goodness, are you Beth Moore? I LOVE you!” But I swore to myself a long time ago that if I ever actually ran into someone relatively famous in real life I would not intrude in their space and bother them, so I didn’t. I just left her alone and got some coffee and went back to my seat. The service was awesome and refreshing. Afterwards, my Mom and Asher and I were walking back to our car when Amanda came running after us. She said, “Hey, I was hoping to catch you before you left. Would it be ok if my mom prayed over you and Nora?” So I said it would be great and guess who her mom was? Beth Moore 🙂 What a surreal moment! We met her and her husband and Amanda’s kids (who are so cute) and Beth Moore put her hands on me and prayed for my little Nora right there. It felt like a direct gift from God, an anointing on Nora’s life, the sweetest blessing for my baby girl. If someone asked me, “If there was any one person in the world who you would want to pray over you and Nora, who would it be?” I would probably have said Beth Moore. I respect her so much and her work has had a direct impact on my spiritual growth since I did my first Beth Moore study in college. How amazing, that God went to all that trouble to give us this precious gift! And how kind of Amanda and her mom, to welcome us and pray for Nora even though they don’t know us. It was definitely the highlight of my week.

Some people have asked that I re-post the information about our Team Nora t-shirts. If you are interested in buying one just contact Michelle Moss:

I hope you all have a good weekend! I’ll update after Nora’s appointment on Monday.