Our first IUT was successful and baby handled it well. He is squirming and kicking much more now than he was before the transfusion so he must be feeling a lot better. Dr. Trevett did an MCA scan right before the transfusion just to see what baby’s numbers were and his MoM was 1.5 but we are guessing it was actually higher than that. Since I had had two rounds of steroid shots to develop baby’s lungs, and steroids can artificially lower MCA scans, we think it was over 1.5 by that point. Dr. Trevett had planned to go through the placenta and into the umbilical cord with the needle and put a paralytic and sedative into the cord to keep baby still during the procedure but had to change plans at the last minute. The back of baby’s neck was pressed up against the umbilical cord insertion and Dr. Trevett didn’t want to risk going near his neck with a needle before he was paralyzed so he stuck baby in the thigh with the needle to paralyze and sedate him. Baby did not seem to like that one bit and his heart rate started acting up after that. He started having some arrhythmia and his heart rate seemed kind of slow. Dr. Trevett said he was having PACs (premature atrial contractions) which are usually harmless, but it definitely scared me at the time. They then went into baby’s umbilical cord with the needle and drew some of his blood. My husband, Josh, was allowed to be in the operating room for the first time ever to watch the procedure and be there to support me and he said he was shocked by how much blood they drew. He was equally surprised when he saw how much blood they put into baby! He said he was expecting them to give just a tiny amount of blood since baby is still so small (at least compared to a grown person) but he said they hung a normal looking bag of blood on an IV pole and started slowly transfusing it into my belly (and into baby) 10ccs at a time. Baby’s beginning hematocrit was 28.6 and his ending hematocrit was 40, which we were very happy with. Dr. Trevett decided not to do the IPT (putting extra blood into baby’s belly) since his beginning hematocrit wasn’t too low. I am glad that he didn’t now because of baby’s weird heart rhythm.

Out of all the IUTs I’ve had (this was my seventh) this one was definitely the most painful. Apparently they don’t really sedate women for the procedure at this hospital so that came as a surprise. They did give me a little pill to take orally before the procedure (Ativan, I think) but it had absolutely no effect on me and I felt completely awake and wired during the procedure, which wasn’t helpful for my nerves or for the pain of the needles going through my uterus and placenta. Dr. Trevett said he will definitely use a sedative for me during the next IUT so hopefully that will be a better experience.

After the IUT was finished Dr. Trevett kept me and baby on the monitor for six hours to make sure he was ok. His heart continued to have the weird offbeat PACs, which was unnerving. Eventually his paralytic wore off and he started moving around a lot so that was reassuring. I had contractions every 10-30 minutes but they never got closer than that so no one was worried. The contractions have continued since the IUT. The same thing happened with Nora and I was diagnosed with an “irritable uterus.” That basically just means that I got to have regular, real contractions that didn’t induce labor or make labor progress. With Nora it got worse after each IUT so I’m expecting the same thing to happen with this baby. Anyway, I was released to go back to the hotel after that and the next day Dr. Trevett did an ultrasound to check on baby. It’s always a good idea to do an ultrasound 24 hours after an IUT since the first 24 hours after the procedure are the most critical. If anything is going to go wrong it will be within 24 hours of the IUT. His MoM was down to 1.03 and his arrhythmia had completely cleared up. It was so good to hear his heartbeat sounding normal again. Dr. Trevett will do baby’s second IUT on Monday, Aug 14th, 12 days after his first IUT.

Now that IUTs have started I have stopped doing the weekly IVIG infusions and will have my port removed next week since it isn’t needed anymore. I’m really excited to get the port removed and stop IVIG! I already feel less nauseated (finally went a whole day without taking Zofran!) and have a little more muscle strength than before. Thank you all so much for praying for us and encouraging us. I had so much peace through everything that happened this past week and I know that would have been impossible without God and without your prayers. Please continue to pray for our boy. He has a lot of hurdles to get past to make it here alive and healthy. Here is a picture of him at his check up after the IUT. He was rolling over so the picture isn’t good but you can see his cute, chubby fists, ready to fight! 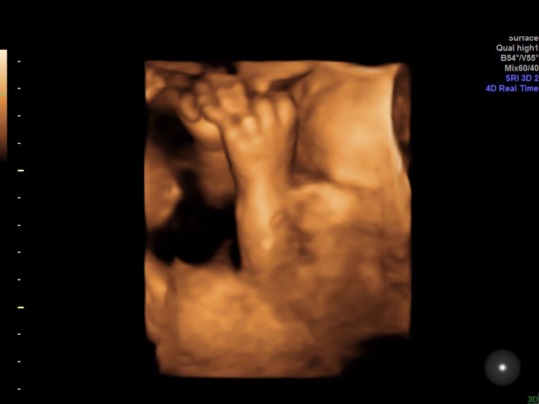 4 thoughts on “First IUT a Success”