Today is our baby Callum’s due date! It is hard to believe he is almost six weeks old on his due date.

Yesterday, Callum had his sixth blood transfusion (third post birth transfusion.) His hematocrit had held steady at about 29 the past few weeks but this week it suddenly dropped to 23. He wasn’t eating well and was more irritable than usual so his hematologist and I thought it was best to go ahead and transfuse. The doctors and nurses at Children’s of Alabama have been so wonderful, just like they were with Nora a couple years ago. They called IV therapy to insert Callum’s IV since he is so tiny and they hit his vein on the first try. They also had to double check his blood type since it had changed since birth. He was born O- because he was 100% donor blood at birth, but since then he has started making his own blood so yesterday when they tested him again, his blood type was O+. During the blood transfusion I was able to breastfeed Callum (some hospitals don’t allow baby to eat at all until the transfusion is finished) and I had a comfortable recliner to sit and hold him in the whole time. He handled it really well and slept in my arms or nursed throughout the transfusion. I think he was just happy to have a whole day of Mommy’s complete attention for once. 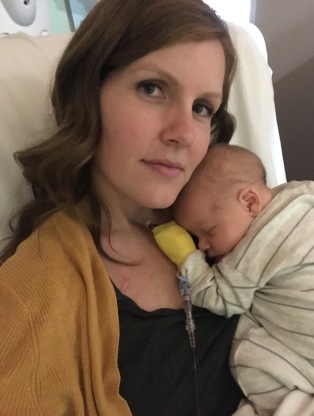 We will do blood work again in about two weeks to see how Callum is doing. They tested Callum’s blood yesterday to see if he still had some of my antibodies circulating in his system and he does, which means the new kell positive blood he is making now will be attacked by my antibodies. Hopefully soon he will be antibody free and he will be making all of his own blood with no further need for transfusions (like Nora.) Ok, I can barely keep my eyes open so I’m off to bed!