Anti-Kell antibodies, along with the other red cell antibodies during pregnancy, can be very confusing and scary, especially when you are newly diagnosed and trying to figure out what is going on. Since the disorder is very rare, medical professionals don’t encounter it often and sometimes have to rely on their memory of what they learned about it in med school. Some of the most common misconceptions revolve around the antigen blood results, titers and MCA scans. I have been trying for years to come up with an analogy to easily illustrate how these things work together and I have finally found a pretty good one. Obviously it isn’t perfect but it’s the clearest one I’ve been able to come up with to represent these specifics facts. In this post I will be using anti-Kell antibodies as the illustration but the analogy can also be applied to the other red cell antibodies such as E, D, c, Jka, Jkb, Fya, Fyb, etc. So, here is my shark analogy:

The sharks represent the mother’s antibodies. They have the potential to be very dangerous, they are designed to attack and destroy. But this doesn’t necessarily mean that the baby will be attacked by the shark. Many of us have been in the ocean with sharks and not been attacked by sharks. Just because they are there it doesn’t mean that they will attack. For most people, the thought of sharks is terrifying and the thought of these antibodies possibly harming our babies is terrifying as well.

Let’s talk about the antigen first. The antigen is hereditary and is passed down from a parent. It isn’t dangerous, just a protein in your blood, similar to a blood type. If the baby has the antigen, passed down from his father, then that puts the baby in the ocean with the sharks. Still not necessarily getting attacked by the sharks but in the water and possibly in danger. If the baby did not get the antigen from the father, then the baby is on the beach, far back from the shoreline, playing peacefully in the sand or maybe taking a nap. The sharks are still in the water with all their muscle and sharp teeth, but the baby is way up on the land, completely out of harms way. 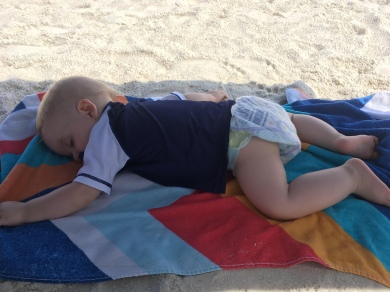 This is why it’s important to have the baby’s father tested for the Kell antigen. It’s obviously necessary to know whether your baby is in the water with the sharks or up on the beach playing peacefully in the sand. Many times I’ve been approached by nervous parents who tell me that the nurse or even the MFM has told them the antigen status of the father has no effect on the baby. Or they have been told, after the father’s test showed he is negative for the Kell antigen, that the baby could still be attacked by the mother’s antibodies. This is simply not true. There is no way a shark can attack a baby who is way back away from the water, on the sand. And there is no possible way for the antibodies to hurt your baby if the baby is Kell antigen negative. By the way, the mother is always Kell antigen negative since it is impossible to produce anti-Kell antibodies if you have the Kell antigen. This is why we always focus on the father’s Kell antigen status. If he is negative for the antigen we know that two negative parents cannot possibly pass down a gene to their baby that they themselves don’t have.

Ok, so if your baby’s Daddy is Kell antigen negative, your baby is safely playing on the beach and there is no need to worry about any sharks. If your baby’s Daddy is Kell antigen positive then it’s possible that your baby might be positive for the antigen as well. You can find out at 14 weeks by doing a non-invasive maternal blood test if your baby is Kell antigen positive or negative. The blood test can also be used to test for the E antigen and the c antigen. There is an even earlier maternal blood test to check the baby for the D antigen (rh.) For all other antibodies an amniocentesis can be done at 16 weeks to check baby for the antigen. So, what if my baby has the antigen? That means your baby is in the water with the sharks. In my analogy we are standing on the shoreline looking out at the ocean and the baby is under the water swimming around, much like they do in the womb. It’s very scary as a mother to know that your baby is under the water with the sharks and you can only gaze out anxiously at the surface of the water, unable to really check on the baby and see how he is doing.

This is how it feels during a sensitized pregnancy. It is such a helpless, scary experience to know you can’t physically see or help your baby stay safe from the sharks. Thankfully, there are ways that our heroes, the medical community, can check on our babies and protect them from the sharks.

First, let’s talk about the titer. Your titer shows the amount of antibodies that are in your blood. The titer does not tell us anything about how our baby is doing under the water. Is baby being attacked? Is he struggling? Is he ok? Titer does not answer any of those questions. The only question the titer answers is “How many sharks are in the water with my baby?” Through years of research, doctors have come up with a critical titer for each antibody. The critical titer says, “Once there are this many sharks in the water with your baby, your baby is actually in danger of being attacked.” For most antibodies the critical titer is 16 and for Kell the critical titer is 4. A recent study also showed that Kell in particular can affect the baby at any titer, even titers below the critical threshold. Regardless of the type of antibody, even with a low titer, there is still at least one shark down there swimming around with your baby. Titers are helpful though, because they give an idea of how closely the baby should be watched and whether baby needs a shark cage or not. Only the babies in the most dire circumstance need a shark cage, but I’ll get to that later.

So, a very high titer means there are a lot of sharks down there with your baby, which does raise the chances of baby being attacked. My titer was 1,024 and all of my babies happened to have the Kell antigen, so with each pregnancy I had a baby swimming in shark infested waters. As expected, all three of them were attacked at some point. If you have a low titer, there are fewer sharks and a lower chance of being attacked. But it is still important to be vigilant just like you would if your baby was swimming around in the ocean with a couple of sharks out there.

MCA scans measure how fast your baby’s blood is flowing through the middle cerebral artery in the brain. The MCA scan will give you a PSV number, which is the speed at which your baby’s blood is flowing and if it is too fast, the doctors can be pretty certain that your baby is anemic. The PSV number can be converted to an MoM using this calculator. An MoM above 1.5 signals an anemic baby that needs help. So in our analogy, the MCA scans are the doctor’s way of going down under the water and getting eyes on baby. In our analogy the MCA scan answers the questions, “Is my baby being attacked by the sharks?” “Is my baby’s life in danger?” “Does my baby need help fighting off the sharks?” The MCA scans answer the important questions that regular ultrasounds and titers cannot answer. The real life questions the MCA scan answers are: “Is my baby anemic?” “How anemic is my baby?” “Does my baby need intervention in order to survive?” “Is my baby’s life in danger?” This is why MCA scans are so important. Would you be satisfied just knowing how many sharks are in the water? Or would you also like to know exactly how your baby is doing in the water and whether your baby needs help or not? Women with critical titers should have weekly MCA scans starting between 16-18 weeks. Thankfully, fetal anemia is treatable, but only if it is caught in time.

So, what if my baby is being attacked by the “sharks” and is anemic? The doctors can help the baby fight off the sharks by giving the baby blood through an intrauterine blood transfusion which helps keep the baby safe. Another way that doctors keep the baby safe is by monitoring closely and removing them from the shark infested waters as soon as it is safer for baby to be on the outside.

What about the shark cage mentioned before? I’m using the shark cage to represent IVIG given early in pregnancy. IVIG is usually given (often only at the mother’s prompting) to women who have had a previous loss or previous severely affected pregnancy, since it is obvious that the mother’s antibodies are very aggressive in those cases. But I am also seeing IVIG being offered more frequently to women who have no previous loss or even previous severely affected pregnancy but have very high titers, usually 256 or 512 and above. I think (just my personal opinion here) every woman with titers in the hundreds or thousands should be encouraged to start IVIG treatments early in the pregnancy (10-12 weeks) to protect their baby from their antibodies. The IVIG does act like a shark cage in our analogy by protecting the baby from the sharks that are swimming all around. IVIG delays and/or prevents fetal anemia and it is a good way to keep the baby safe in extreme cases. The shark cage protects the baby from being attacked whereas the more common approach just watches and waits for the baby to be attacked before stepping in and trying to help the baby. With both Nora and Callum we used the IVIG “shark cage” to protect them while they were in shark infested waters and that is why they are alive today. My doctors refused to even consider the IVIG shark cage for Lucy and that is why she was attacked so early and so viciously.

So here is a quick recap of the shark analogy:

TITER=NUMBER OF SHARKS IN THE WATER

ANTIGEN NEGATIVE=BABY IS ON THE LAND

ANTIGEN POSITIVE=BABY IS IN THE WATER

MCA SCAN=DOCTOR GOES UNDER THE WATER TO CHECK ON BABY

Hopefully my shark analogy has helped some of you and not confused you more. Thanks to my ISO Moms in our Facebook group for helping me clear up some of the details in my shark analogy!

6 thoughts on “Titers, Antigens and Sharks”