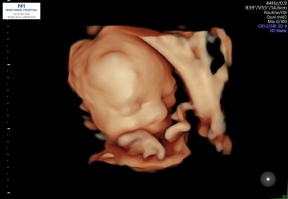 As I continue navigating my way through this high risk pregnancy, which is my fourth Kell sensitized pregnancy, I am learning so many things along the way. I could share about the truths this baby is teaching me about hardship, perseverance and faith but for this blog post I wanted to just list some of the important medical information that I want to remember later. I’m afraid if I don’t write about these details I might forget them and these are very important take aways for other families dealing with alloimmunized pregnancies. So here are the things I am learning and re-learning during this pregnancy that I want you to know if you are facing an alloimmunized pregnancy as well.

If you have a critical titer you need weekly MCA scans to monitor the baby for fetal anemia.

Our babies can become anemic in the womb in just a matter of days. Fetal anemia can only be treated if you and your doctor know that the baby is anemic in the first place. The way to detect fetal anemia is by doing an MCA doppler scan, which measures how quickly the blood is flowing through your baby’s middle cerebral artery in the brain. These scans can be done as early as 15 weeks if the MFM has experience performing MCA scans. If you have a critical titer (4 and above for Kell, 16 and above for all other red cell antibodies) you should start weekly MCA scans by 16-18 weeks.

With this current pregnancy my baby had an MoM of 1.23 at 24 weeks. Six days later his MoM was 1.5 (some readings up to 1.56.) Since we were scanning weekly we were able to catch the anemia in time to treat it. They found matching donor blood, gave me steroids to develop baby’s lungs and then performed the IUT a couple days later. His beginning hematocrit was 25, so it was the perfect time to start IUTs.

If your MFM will not perform weekly MCA scans even though you have a critical titer, find an MFM who will. I drive to another state every week to have these scans done because the MFMs in my state will not provide the right care for my baby. It is worth the drive.

Timing of IUTs should not be based on MCA scans alone.

After IUTs start, MCA scans are not as accurate as they were before. Fetal blood flows differently than adult donor blood. Once IUTs start, the baby either has a mixture of fetal blood and adult donor blood or (eventually) has 100% adult donor blood. This means the MCA scans aren’t always as accurate at detecting fetal anemia. MFMs should base the timing of subsequent IUTs on the ending hematocrit from the previous IUT. Other factors can come into play like how the baby is looking on scans, what number IUT it is and whether your baby had an IPT (transfusion into the belly), IVT (transfusion into the umbilical vein) or both.

After my second IUT, Dr Trevett scheduled the next IUT for two weeks later based on the amount of blood they put into the baby and the ending hematocrit. He continued to scan the baby every week to make sure there were no signs of distress or extreme anemia. The week of the scheduled IUT, Dr Trevett performed an MCA scan and baby’s MoM was 1.39 which is clearly below the normal 1.5 cutoff for a blood transfusion. Thankfully he was not basing the timing of the IUT on the MCA scan alone so we went ahead with the procedure. During the IUT we learned that the baby’s hematocrit was surprisingly low- 20.9. I am so thankful that Dr Trevett knew how to time the IUTs and didn’t insist on waiting for a high MoM to do the next transfusion.

Subsequent IUTs can be performed as soon as 48 hours after the previous one if needed.

My daughter Lucy’s hematocrit at the beginning of her IUT was six, which is extremely low. My MFMs (at the time) transfused 20ccs of donor blood and then sent me home. They would not do another ultrasound until a week later. Their reasoning was that “IUTs can’t be done closer than a week apart anyway, so why check on the baby?” I believed them. Lucy never moved again after that IUT and died just over a week later.

With this baby the first IUT didn’t go exactly as planned. Dr Trevett had trouble getting the needle into the cord and the baby was extremely active. Despite giving a double dose of paralytic medication, the baby still did not stop moving. Baby eventually dislodged the needle when he bucked into it. Dr Trevett and Dr Gomez discussed what they should do and they decided to stop the procedure and do another IUT 48 hours later. The second IUT went smoothly and the baby was still anemic at the beginning of the procedure. We all felt relieved that the second attempt went well and the doctors were able to fill up baby’s blood supply.

IUTs should only be performed by MFMs with a lot of experience.

Intrauterine blood transfusions are actually very rarely needed by patients and MFMs do not perform them often. This means that few MFMs have adequate experience with this procedure. It isn’t an easy procedure to perform and the baby’s survival rate is much higher if the IUT is done by a practitioner with extensive knowledge of IUTs and experience doing the procedure. Before allowing your MFM to do an IUT on your baby ask them:

“How many IUTs do you perform on average per year?”

“What is your success rate?”

“What is the earliest IUT you have performed?”

“How will you determine how to space the timing of subsequent IUTs?”

“Will you temporarily paralyze the baby before the procedure?”

As mentioned before, I receive my prenatal care in a different state even though there is a large teaching hospital only an hour away with a fairly large MFM group. The MFMs at that hospital do not have adequate experience performing IUTs and they haven’t updated their protocols in years. It is so worth the drive to know my child is in good hands and has a high probability of surviving the IUT. Many women travel to other cities or states in order to have a more experienced MFM perform their IUTs. I love seeing MFMs who refer patients to other practitioners for IUTs or are willing to collaborate with other doctors for their patient’s care.

If you feel uneasy about your MFM’s ability to perform an IUT safely, it is always a good idea to get a second opinion. Feel free to email me if you would like a recommendation for a second opinion. My email address is bethanysk55@yahoo.com or you can always message me privately on Facebook (Bethany Weathersby)

If you have experienced an alloimmunized pregnancy or are experiencing one now, like I am, what have you learned along the way? I would love to learn from your experiences as well!