One year ago today I saw Lucy and heard her heartbeat for the first time. I also found out I had anti-kell antibodies. I was nine weeks pregnant and went to my first doctor’s appointment.

Josh skipped one of his classes to come and see the new baby on the ultrasound. I had a nagging feeling that something was going to be wrong with the baby or they would have trouble finding the heartbeat. We were so relieved when we saw her kicking around on that ultrasound screen! She was perfect and developing exactly how she should have been. Her heartbeat was wonderful and I remember my own heart fluttering with excitement and joy when I heard that sweet sound for the first time. We were so happy and desperately hoping for a girl. Since everything looked great, Josh left and went back to class while I went to meet with the OB. I thought we would be discussing what we would be doing differently this time towards the end of the pregnancy since Asher had gone past his due date in my last pregnancy and weighed over 10 pounds. I pictured us laughing about how surprised we both were when Asher came out so gigantic. He was so huge he had a fat roll between his eyes. Ok, I have to share a picture now-

But we never talked about Asher or about how I would be delivering this new baby. Dr. C walked in with a smile, but I could tell that his eyes were worried. He didn’t ask how I was feeling or talk about how healthy the baby looked on the ultrasound. I remember his exact words, “There’s a problem with the blood work.” And my heart sank and I wished Josh had stayed with me. I found out my new baby had an 80% chance at surviving and that I would never have a normal pregnancy again. I remember being so confused about the antibodies, wondering why they hadn’t affected Liam or Asher. Dr. C. said so many things and I absorbed maybe 20% of it because I just kept thinking, “This can’t be happening.” I asked him to write down what the “disorder” was called so I could go home and research it online. I still have the piece of paper that he wrote on. For some weird reason I feel very sentimental about it. 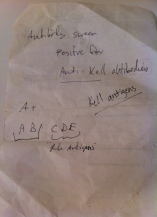 I assumed Lucy would make it, but I was devastated that I might have to stop after only 3 children. I didn’t know how I could function with only 3 children. How could this be my last baby? I’m pretty sure Dr. C had seen my titer and knew how strong my antibodies were. Anything over 8 was critical for the baby and mine were 1,024. Luckily, he didn’t share that info with me that day and I didn’t know to ask. What he did say was that the situation was dire. I thought it was strange that Lucy had an 80% chance of survival and she looked perfect, but my doctor told me the situation was dire. Now, a year later, I am so thankful he told me that. I had 11 MFMs (high risk doctors) later on in the pregnancy and they all seemed very optimistic and nonchalant. Only Dr. C, who didn’t even specialize in high risk pregnancies, actually gave me a clear picture of what Lucy and I were facing.

After the appointment was over I went to my mom’s to pick up the boys. They were running around chasing each other in the front yard. I watched them laughing and rolling around on the ground, the sun reflecting off their blonde hair, and I absolutely COULD NOT FATHOM losing a child. I thought how unfair it was that these two got here so easily but this new little one already had so many things to overcome. “But she has an 80% chance!”  I told myself. Unfortunately, someone has to be in that 20%, and that was us.

7 thoughts on “One year ago today…”