This adoption story does not end well. We have lost our “rainbow baby” yet again. I cannot believe I am writing this post. What I envisioned was a beautiful post about God’s amazing redemption and love for me and our beautiful new daughter, Scarlet Mae Weathersby. Instead, I will be telling the most heart wrenching story of how this adoption failed and how our hearts were broken, yet again.

The birth parents, Kailee M. and Peter M. picked us in May and have been telling us since then that we would be Scarlet’s parents. Kailee kept in pretty regular communication with me, often texting several times a day. Since we met her through the internet, Josh and I were very careful of making sure it wasn’t a scam and that she wasn’t just trying to get our money. She had placed a baby boy for adoption last year, so that put our minds at ease some. She seemed sincere and we had a good relationship. We drove the four hours down to Dothan several times to hang out with Kailee, Peter and her two children that she parents. Our visits always went well. She convinced me that she had looked long and hard for “the perfect family” for this baby and was so glad she had found us. Even the last time we were down there at the end of September (my parents came down to meet her with me) she told me that she wasn’t very nervous about the birth part or signing the papers, but the hardest part was finding the perfect family. She told me again how glad she was that she had found us. Several times she also told me she was afraid that we would change our mind, and I assured her that we wouldn’t. I told her I was afraid that she would change her mind and her exact words,”I can tell you till I’m blue in the face, I won’t change my mind, but the bottom line is you just have to trust me and I have to trust you.” Yes, we trusted her. We took the leap. We prayed long and hard for God to show us what to do. We knew the risk and we felt like Scarlet was worth it. This baby needed to have a chance at a beautiful life with us. I feel good that we gave her that chance and we did all we could for her. But back to the story. Kailee basically took all of our money, although we never gave her money directly. She didn’t work (not sure why) and so we were left with all of her bills to pay- rent, utilities, food, gas, etc. All of this is legal in Alabama, by the way. We ordered her pizza when she wanted it. We gave her so much of ourselves. We gave her so much love and we trusted her. I thought we were close. She even asked me (not that long ago) if I would be the godmother of her two children and I said of course. She was the ultimate con artist, apparently.

Kailee told us from the beginning that she was going to go to the OBGYN, but she never went. Every week that went by we stressed, we worried and we prayed for the baby and wondered if she was ok. After having a high risk pregnancy and stillborn baby, it was hard to stand by and do nothing when Kailee would not go to the doctor. She only went a few times to the ER when she was throwing up. I took her once to a 3D ultrasound to see the baby and confirm the gender. Besides that, she had no prenatal care, or if she did she never told us about it. It was so hard to pray and ask God to take care of Scarlet for us and just trust that He would. It reminded me so much of when I was pregnant with Lucy and prayed and begged God to take care of her. It was frustrating to know that Kailee COULD go to the doctor, but just wouldn’t. It was out of our control as was most of this “adoption.”

Everything was going fine as far as we could tell and then after October 11th we got no more texts from Kailee. It worried us. I felt deep down that something was very wrong. I tried to give her space, thinking maybe she was just working through all the emotions and dealing with the last hard days of pregnancy. I didn’t want to pressure her or overwhelm her. But the days went on and on and she never contacted us. I texted, I called, I emailed, but no reply. I even sent a card in the mail begging her to just let us know if she was ok. We never heard from her again. Josh finally got in touch with Peter and he said they had had some marital problems and he hadn’t heard from Kailee either.

Today, Josh decided to try to see if there was anything he could find out on the internet. He found his way to an adoption page that Peter or Kailee (whoever was on Facebook that day) had liked. It was a gay couple from California who had just adopted a baby girl “Ava Mae” from Dothan, Alabama. And there on the computer was the baby I had fallen in love with on the 3D ultrasound. She looked just like Kailee, we knew it was her. Her two dads were thrilled to have her, cuddling her and posing with her for lots of proud pictures. Apparently she was born on October 12th, the day I stepped out on a limb and posted this post, making predictions about the baby’s birth date and weight. Peter confirmed later that yes, she was born on the 12th and Kailee had picked a different family. We have no idea if she picked them at the end or at the beginning of the process. We have no idea if she had other families out there who she was deceiving into thinking they would be adopting this baby. She always did seem to want stuff from us to handle her life expenses, but never seemed particularly concerned about the baby. It was shocking, really, how little her adoption plan seemed to be about the baby and how much it seemed to be about what she could get out of it. It is shocking also, to see that the baby kept our middle name, Mae, which I picked to honor my grandmother, the one who’s mother I had honored with Lucy’s middle name, Dair. They could have at least come up with a different middle name. I am livid, honestly. I probably should do a better job in this post of being loving and forgiving, but right now I feel so angry and hurt. If she truly just changed her mind she could have at least told us so we wouldn’t have been so worried this whole time. I have been pumping breast milk every 3 hours around the clock to make sure I’m ready for this baby when she arrives. Kailee could have at least had the decency to explain to us that she had made a new decision and it did not involve us being Scarlet’s parents. How cowardly. I shudder when I think about all the money that we lost, all of YOUR money that you donated to a baby that we won’t get. To everyone who donated in order to make this adoption possible, thank you, from the bottom of our hearts. We appreciate every one of you and we are praying that God will bless you for your generosity and kindness. We are so sorry that we lost the money. We are embarrassed and heartbroken. We truly prayed through every decision along the way and felt like we did everything God wanted us to do. We did our best. We took a leap of faith. We knew the risks of trusting someone else with the deepest longing in our hearts. It was a risk for me to induce lactation, knowing the baby might not be ours in the end. It was a risk to tell the boys that when the leaves on the trees turned scarlet, their baby sister Scarlet would be here. It was a huge risk to buy a van for our third child, to set up her whole nursery and buy a Halloween costume for her. Everything is ready for her. Her bassinet is ready and waiting next to my bed, all of her clothes are washed and hanging in her closet. Our freezer is FULL of breast milk I pumped for her. The gift basket for Kailee is all ready and sitting on our dresser. We filled it with so many sweet things so that she wouldn’t leave the hospital empty handed and would feel loved and important. We ordered this beautiful necklace for Kailee and dog tags for Peter that say, “Forever in my heart, Scarlet” and a cute baby bracelet for Scarlet to remind her of her first parents. 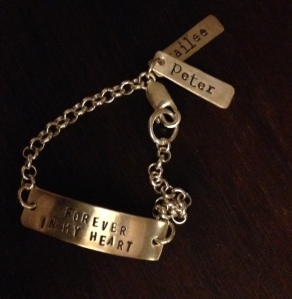 I could go on and on about all the sad reminders we are left with, all the empty spaces where she was going to be, but I’ll stop here. I have no idea how to end this. I don’t know how to move on from this new heartbreak. I don’t know how to trust God after this and it will take a long time for me to forgive Kailee for her deceit, her dishonesty and her cowardice. I do know that we are not giving up. We will keep trying, we will run hard after our God and we will continue to praise Him, even when it feels like He has let us down.