At this time last year we had just arrived in Houston and we felt so afraid and out of sync. It was a huge transition for our family. All of the normal comings and goings ceased and our full focus was on saving Nora’s life. Liam didn’t get to play soccer last spring, Asher was pulled out of preschool and I quit my part time job to move to Houston. We even ended up pulling Liam out of kindergarten about three weeks early so he could move to Houston to be with Asher and me in May. We had recently moved into our house so we were still unpacking and putting things in their place. We had big plans to plant a garden and fix up our back yard in the spring and summer. Nothing was planted in our yard but by God’s grace and goodness, our little Nora continued to grow.

This year is so different. We have settled back into the glorious monotony of life with three kids and no pressing emergencies. Asher is loving his last year of preschool. Liam is thriving in the first grade and both boys will start soccer practice next week. Like many parents with young children, my house is a disaster, I’m exhausted all the time and I am still struggling to lose the last 15 pounds of baby weight and I’m loving all of it (yes, even the baby weight.) Nora is seven months old and so much fun.

She just started saying some words (although most of it is just babbling) this week. She has been saying, “Hey!” for a couple months but this week she started saying, “Hey Dada” “night-night” and (rarely) “Mama.” Nora is still breastfed and loves avocados, green beans, bananas, pears, peas, sweet potatoes…basically all fruits and vegetables, just like her brothers. She is growing well and doesn’t have any problems with anemia or antibodies. One thing that has concerned me is her gross motor skills (she’s great with the fine motor skills and social development.) She is meeting all of her gross motor skills late. She just now is finally able to sit up on her own but she isn’t even close to crawling. Her brothers did everything really early. When Asher was Nora’s age he was almost walking. At first I worried so much because of all the things Nora has been through…she was exposed to so many different drugs in the womb (all class C for pregnancy) like IVIG, Fioricet, Wellbutrin, Zofran, Phenobarbital, etc. She was sedated and paralyzed five times in the womb and had seven blood transfusions all together. She also battled anemia the whole time she was in the womb and her first few months of life. I was so anxious that maybe these things affected her development somehow but after consulting with our pediatrician and a physical therapist, I now am sure that it’s just because of her personality. Every doctor has said she is doing great developmentally. Liam and Asher were so incredibly active and curious and driven to explore when they were babies. Nora is content, laid back and relaxed all of the time and prefers to sit back and observe what’s going on around her. 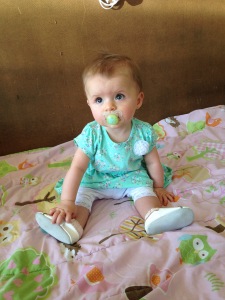 One thing Nora HAS officially been diagnosed with is torticollis and plagiocephaly just like her brother Asher was at this age. These are big words and they kind of sound like scary medical conditions but they really aren’t that big of a deal and are pretty common in babies. Torticollis just means her neck is tighter on one side so she tends to turn her head one way, especially when she sleeps. Because she was lying on one side of her head so much, she has developed a flat spot (plagiocephally) on the back of her head. It’s not dangerous at all, purely cosmetic. Nora has been going to physical therapy for a couple of months to stretch out her neck and is now over the torticollis but her head still looks kind of weirdly shaped from the back. 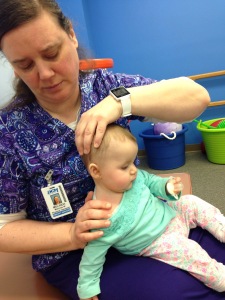 We were given the option of leaving it alone to see if it would round out or trying a cranial band to correct the shape. At first we said we just couldn’t afford the cranial band and it would have to round out on it’s own like Asher’s had. Well, it just wasn’t fixing itself and we started to notice some facial asymmetry so we decided it was worth it to pay for the cranial band. She has had her “helmet” for a couple weeks and we have already seen a lot of improvement in the shape of her head. Hopefully she will be out of it by this summer.

The one thing Nora is a little ahead on is teething. A mouth full of teeth is not a fun experience for a breastfeeding mama, though. Her newest teeth are so hilarious and strange. Here’s a picture of the fangs (up top.)

Every time I get to learn something new about Nora, even the smallest thing like her new funny teeth, or when she is meeting her milestones or what her hair smells like, it feels like a hand wrapped gift from my Father. There are so many things I won’t ever know about Lucy until I get to heaven. I appreciate being able to learn all the details of who Nora is. I love looking up while doing laundry and seeing this… 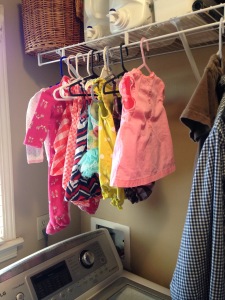 Pink among all the brown and blue. Right here in the beautiful monotony and busyness of daily life I am surrounded by miracles and they all affirm in my heart, “Yes, He is good. Yes, He is faithful. He fulfills His promises. He makes a way in the desert. He heals the broken hearted. He restores and redeems.”