I have been so bad at regularly updating the blog these past few months! I have several posts written in my head that I really want to type out but I just cannot find the time to do it. Part of me feels guilty about this since I used to be so consistent with my blogging, but part of me also feels relieved that there have been no big tragedies in my life lately to blog about. I am busy with life, regular life with my three earth babies, and it is wonderful. I still feel like I’m trying to reintegrate back into “normal” life, except that it is a new normal. I still struggle with the fact that I will never be the person I was before anti-kell antibodies and before my daughter died. This adjustment to my new life feels very similar to when I move to a new country. It’s disorienting at first trying to understand a new culture, learn a new language, figure out a new transportation system, make new friends, find your way around a new city, etc. I’ve realized that it takes me at least a whole year in a new country to start feeling like I’m not just a visitor anymore, like I belong. I still feel like I don’t quite belong here even though she died three and a half years ago.

For the rest of my time here on earth my life will be divided into two parts…no, not even two parts, two completely different lives. There was my life before Lucy and there is my life after Lucy. It feels like I am just now figuring out how to make this new life work. I am feeling more confident finding my way around this new country. The culture shock is not as terrible now, but it still jolts me some days. Often, the cloud of sadness settles on me and overtakes everything. I can’t believe I’m missing her whole life. I can’t believe I have to actually go through the rest of my life not knowing my daughter, not interacting with her on a daily basis. Most of the time, though, I just feel thankful. I’m thankful for all that God has done for me. I’m thankful for the many ways He continually fulfills His promise to me that He made on the day Lucy died. He said He would redeem her death and my pain, and He is slowly doing that, day by day (this is one of the blog posts I need to write!)

I started working part time again teaching English to German families and I love it. It is so rewarding and fulfilling for me and the extra income is desperately needed. We finished paying off all of Nora’s medical bills, but we still have our credit card bill to pay off. Normally we don’t use our credit card at all unless there is an emergency but after we lost all of our savings on the “adoption” and I moved to Houston last year we had to use it on a regular basis. Hopefully we can now pay it off over the next year.

Lately I’ve been struggling with the fact that if I didn’t have anti-kell antibodies, we would have already been trying again for our next baby. We would have to get pregnant this month or next month if we wanted Nora to have a sibling two years younger than her. It hurts me to see Liam and Asher play and wrestle while Nora sits all alone on the sidelines, smiling sweetly at her brothers. She should have a three year old sister. I wish I could be pregnant right now with her little brother or sister. I don’t want her to be all alone without a sibling friend close in age. It is another loss that hurts me every day. We are not trying to conceive, by the way. Here is Nora playing with her stuffed animal friends on her little couch that she got for her birthday. 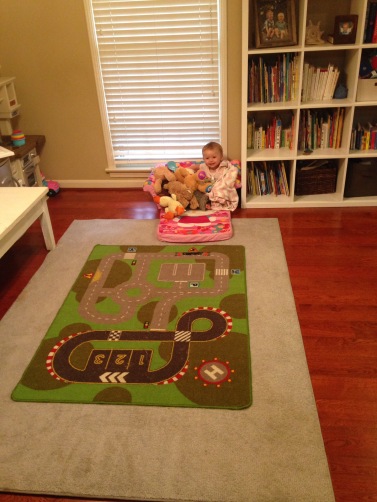 Nora is now 14 months old and is still such a content, joyful baby. I love having a little girl in the house. She is so different from her brothers. She loves shoes, clothes and jewelry and tries to dress herself already. She is very maternal like I was when I was little. Her baby dolls and stuffed animals have all been rocked to sleep, bottle fed, kissed, patted, dressed, undressed, dressed again and even sung to. Nora loves talking and singing. Her favorite sentences are “I love you.” and “I like this.” I ask her, “Nora, who is your hero?” and she says, “Doc Mo” which is her version of Dr. Moise. Last night she was playing with her Daddy before bed and she pointed to her belly and said, “Tickle this.” She is finally walking all over the place and trying to keep up with her brothers. They are still obsessed with her. They think she’s hilarious and adorable and they can’t believe how soft her skin is. I often hear one of them say something like, “Mommy, Nora is so cute she’s making my eyes cry.” They are gentle around her and very protective of her. If one of them accidentally knocks her down or hurts her somehow, I always end up comforting the big brother more than I have to comfort Nora. She might cry for a minute but her brother will cry for half an hour and then feel guilty all day about how he knocked her over and hurt her. In these moments I feel extra thankful that she didn’t die in my womb. Her brothers would have been absolutely devastated. I’m so glad they didn’t have to go through that heartache again. Liam asks often about Scarlet and Lucy and he says on a regular basis, “What if we had been able to keep Lucy, Scarlet AND Nora? I would have loved that.” He just said it again this morning. Our lives are interwoven with grief and joy and “what might have beens” but they are anchored in the steadiness of God’s love and goodness. Our joy and our stability are found in Him and we are so thankful that He is unchanging. Here are a few pictures of Nora lately and a video from her first birthday that I forgot to post earlier. 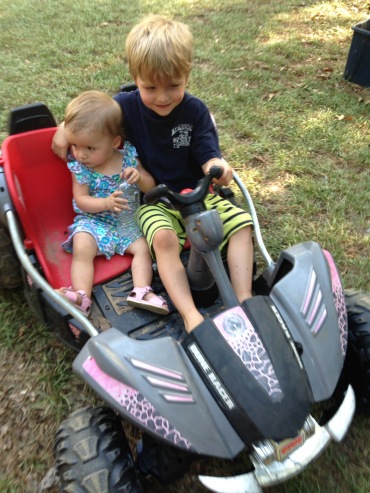 When big brother “helps” Nora get a sip and almost drowns her instead. Ha!

That time Nora loved the little chick so much she almost squeezed it to death.

Nora feeds a baby goat at the barnyard.

This morning she tried out the sandbox for the very first time and scooped shovels of sand onto her head.